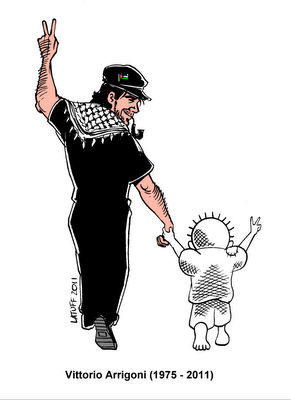 The kidnapping and assassination of Vittorio Arrigoni, activist and correspondent of the International Solidarity Movement with Palestine in Gaza – was meant as an Israeli warning: “Stay away from Gaza and Palestine”. Allegedly the kidnapping and assassination was carried out by pro-Saudi group (s), who were previously involved in riots in Palestinian refugee camps in Lebanon. Tehran’s rising influence in the Middle East has brought both Israel and Saudi Arabia to share the same bed.

In another move – the Zionist regime has requested Ankara to use its influence and stop activists sailing to Gaza on the first anniversary of an Israeli raid on a Turkish ship, but it said the flotilla plan was not Ankara’s concern.

The Free Gaza Movement has announced that in honor of Vittorio Arrigoni, the coming voyage of Gaza Flotilla II has been renamed ‘Freedom Flotilla – Stay Human’.

“Vittorio had sailed with us from Greece on the first small fishing boat to enter Gaza in the summer of 2008, one of 44 activists sailing to protest the illegal blockade imposed by Israel against the 1.5 million Palestinians living in Gaza. We will do our best, Vik, to carry on the work you have done. The flotilla will return to Gaza in your honor,” statement issued by Free Gaza Movement.

Tim King quoted Ken O’Keefe, Vittorio’s fellow activist at Salem-News (April 14, 2011) that the assassination of Vittorio Arrigoni has the finger-prints of Israeli Mossad or its collaborators.

Gaza Flotilla II will set sail in May to commemorate the first anniversary of the Mavi Marmara’s fatal voyage (May 31, 2010); Britain 2 Gaza is the UK partner in this mission. It is being brought together by 5 British campaign groups: Friends of Al-Aqsa, the British Muslim Initiative, the Palestine Solidarity Campaign, the Stop the War Coalition and the Palestinian Forum of Britain (PFB). This humanitarian mission will be made up of similar initiatives from around 20 countries, including Canada, France, Greece, Ireland, Italy, Spain, Switzerland, Turkey and the USA.

The Zionist-regime is now doing everything it can to see that this mission fails even before it has left port. Benji Netanyahu has threatened to “act firmly” using “force” against the flotilla in May. He has also asked European leaders and UN Secretary-General Ban Ki-Moon to help him stop the Freedom Flotilla from setting sail. To his credit, Ban Ki-Moon responded by telling Netanyahu that the siege of Gaza should be lifted.