Judeo-Christians Zionists and Hindu extremists (Hindutva) are famous for distorting Muslim history to serve their political and ethnic agenda.

Narendra Modi, as chief minister of Gujarat allowed anti-Muslims riots in 2002 which resulted in the death of over 2,000 Muslim men, women and children. The Hindu fascists also demolished over 500 mosques and other religious buildings in Gujarat state alone.

Last week, one of world’s seven wonders, Taj Mahal, became the victim of Hindu fascism. BJP’s MP Sangjeet Singh Som in a statement supported the removal of Taj Mahal from the list of historic buildings in UP province tourism booklet.

“Many people were worried that the Taj Mahal was removed from the list of historical places in the UP tourism booklet. What history are we talking about? The man who built Taj Mahal imprisoned his father. He wanted to massacre Hindus. If this is history, then it is very unfortunate and we will change this history, I guarantee you,” said Son.

“The Yogi Adityanath government had scored yet again by leaving the Taj Mahal out of a government booklet on tourist attractions. When this omission attracted considerable flak from the opposition and on the social media the BJP in government spun out a story that the booklet had mentioned only ongoing tourism projects. Not everyone was convinced, and Som as is his way plunged straight into the controversy by moving the Taj out of the ‘it is originally a Shiv Mandir’ argument that a section of the BJP/RSS have always maintained into his categorical“it is built by traitors.” Inherent in this statement made at a public rally is that the Taj should not even be retained, but be demolished as it was constructed by traitors and anti-nationals. Read of course Muslims,” wrote Indian journalist Natasha Singh on October 16, 2017.

Muslims ruled partially or entire Indian sub-continent consisting of nearly 5,000 princely states between 712-1857 CE. Sultan Zahiruddin Muhammad Babur of Ghaznavi (Afghanistan) founded the Mughal dynasty in Delhi in 1526 CE which was destroyed by British colonists in 1857 CE. It’s under Mughal dynasty that all 5,000 princely states (currently India, Pakistan and Bangladesh) appeared as a united Hindustan (India) on world map while Afghanistan remained under Mughal kings.

During the 1,000-year Muslim rule, the royalty never forced its Muslim religion on its Hindu subjects. The result was that when England declared India its colony in 1857, Muslims only made 10% of country’s population. Under Muslim rule, Hindus were free to practice their religion and built new temples. Hindu elites held many top positions at the royal courts, military and civic bodies.

Muslim rulers did not introduce Islam to Hindus. Islam first came to the western coast of India when Arab traders as early as the 7th century CE came to coastal Malabar and Konkan-Gujarat.

Rehmat Ali Wajidke was member of the Ghadar (Revolution) Party that was formed in North America in 1913 by immigrants from Indian sub-continent against the British colonial authority in Delhi. He was hanged by the British Raj on March 27, 1915 on his return to India for his participation in the party which was declared as a terrorist organization bent on overthrowing British colonial empire.

Aujla also located Wajidke’s family in Pakistan and brought it to Indian state of Punjab where it was honored by Punjab government as family of India’s hero who gave his life for the country.

Accepting the honor, Aujla said: “Today when the Hindu nationalists are in power in India, we need to remind our younger generation that men like Wajidke and not the RSS played a significant role during the freedom movement. This has become important as the Hindutva forces continue to question the patriotism of Muslims.”

When Wajidke was hanged, there was another freedom activist, Chaudhry Rehmat Ali, 20, (died in 1951) who was in favor a separate country for Indian Muslims. He is credited for coining the name Pakistan (Punjab, Frontier province, Sindh, Balochistan and Kashmir) for the new Muslim country out of British ruled India while he was studying at Cambridge, England. 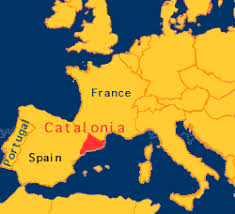 Currently, every Western pundit is commenting on Catalonian independence referendum expect that an independent Catalonian state could become an anti-Israel Muslim state.

I know it’s a conspiracy theory – but it’s not mine. Its credit goes to NY-based Gatestone Institute founded by Nina Rosenwald aka The sugar Mama of Anti-Muslim Hate – and is chaired by Zionist Jew John Bolton.

“A successful push for independence in the Spanish autonomous region of Catalonia would lead to the establishment of a country with the third-largest percentage of Muslims in Western Europe, just behind France and Belgium, and far ahead of Britain and Germany. An independent Catalonia, with its capital in Barcelona, would also be home to the largest concentration of radical Islamists in Europe,” wrote Kern.

Ignoring profession hasbara idiot’s world knowledge – the Muslim population in Barcelona is 324,000, Belgium is 650,000, France is 7-8 million, Germany is 4.7 million, and Britain is 3 million.

Catalonia region was part of Muslim Spain from 713 to 801 CE while most of the remaining Spanish land remained under Muslim rule till 1492 CE. By 810 CE, all Muslim population of Catalonia was wiped out.

Having said that – let’s see what Israeli pundits say on this topic. On October 02, Victor Harel at Ha’aretz said that an independent Catalonia would be a huge mistake – even though it’s a big tourist destination for Israeli Jews.

On October 6, Asaf Ronel wrote at Ha’aretz that while “Catalonian are achieving their goal – Palestinian are getting farther from theirs.”

On October 9, former British ambassador to Uzbekistan, Craig Murray posted on his blog: “Hitler was not the only nuts enough to think his Reich would last for a thousand years. Spain (which incidentally was almost entirely Muslim a thousand years ago) tops Hitler for mad ambition. Spain believes its current borders will last forever.”

Israeli Mossad, which is notorious for conducting false flag terrorist attacks around the globe, has been active in Spain to demonize Muslim citizen. The most publicized terror attacks were Madrid train bombing (here) and recent Bercelona terror attack.

Interestingly, Catalonia’s neighboring country Portugal (Al-Garb Al-Andalus) was under Muslim rule from 711 to 1249 CE. Muslim army from North Africa conquered part of southern France for the Umayyad dynasty in 740 CE.